When I was thinking about which vegetable to highlight, as we are leaving the winter season, I thought of the sorely-misunderstood and poorly cooked Brussels sprouts. They are one of my family’s absolute favorite foods – I’m on the third batch in as many weeks – but most folks treat them badly and I wouldn’t like them cooked that way, either!

Brussels sprouts are in the same cruciferous vegetable family as some of the other vegetables I’ve written about: turnip, rutabaga, & kohlrabi. As well as other, more commonly eaten vegetables such as broccoli and cabbage. While a Brussels sprout bud has the many layers like cabbage does, Brussels sprouts buds grow on a stalk and cabbage is a large head that has its own root.
​​
You will usually find Brussels sprouts year-round in the grocery store, but they are most abundant in the winter months – think of those large, fresh stalks you can find during the holidays. Those stalks are cheaper, due to less labor to harvest, and they stay fresher longer. Brussels sprouts, in their present form, were cultivated in Belgium, which is where their name originated from. Brussels is the capital of Belgium, so remember the capital “B” and the “s” in the name when you talk about these delicious vegetables!

Brussels sprouts can be nutty and crunchy, if cooked properly and when fresh. They can also be bitter and limp, when cooked improperly.

Brussels sprouts contain sulfur; therefore, if cooked too long, the sulfur can smell up the kitchen and cause the Brussels sprouts to have a strong flavor. That smell is a compound that fights cancer (see below). This and other compounds are released when Brussels sprouts are cut (1).

How do you cook Brussels sprouts? ​ 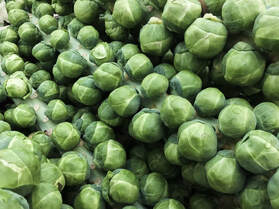 Most folks boil them, sliced in half or whole. Because the buds are round (or half-rounds), some sections are over-cooked and other parts are raw. Consider trying a different cooking method next time you prepare Brussels sprouts!

If you do boil or steam your Brussels sprouts, it is vital that you cook them until just bright green. They will continue to cook from residual heat. It’s also important that you slice them the same size so they will cook at the same rate.

You can also roast them to bring out their sweet, nutty flavor. Coat them with oil, salt, and pepper first. Click here for more detailed preparation options.

View the rest of the blog post from Nancy Miller, a Registered Dietitian Nutritionist with Sound Dietitians, for nutrition information and a recipe for Shredded Brussels Sprouts with Bacon and Cranberries on the Sound Dietitians blog: www.sounddietitians.com/blog/brussels-sprouts-can-they-really-be-tasty.