The City of Lynnwood hosted a ribbon cutting ceremony on May 18 to celebrate the completion of the first phase of construction in the regional Bike2Health project, a collaborative effort to complete 11 critical missing links of the existing regional bicycle network in south Snohomish County.

Those gathered represent the City of Lynnwood, City of Edmonds, City of Mountlake Terrace, Verdant Health Commission, Cascade Bicycle Club, and other supporting residents and organizations.

Bike2Health will offer opportunities for community members to learn more about safe cycling through bike rodeos for children and other engagement opportunities during the next three years.

The next bike rodeo is just around the corner at the Health & Fitness Expo taking place on Saturday, May 20 from 9 a.m. to 12 p.m. at the Edmonds School District Stadium, 7600 212th St. SW in Edmonds.

Sign up for e-newsletter updates and learn more about the project at bike2health.org.

Funded by a $1.9 million grant from the Verdant Health Commission, the Bike2Health Project will improve access to health and wellness choices, make bicycling safer, and increase the region’s connectivity. For the most up-to-date information on Bike2Health, visit bike2health.org or email bike2health@verdanthealth.org. 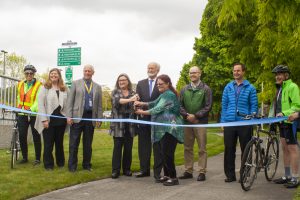