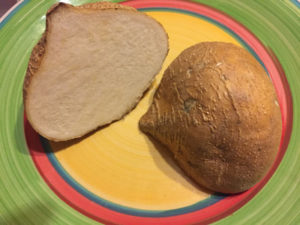 One of the reasons to try new vegetables you may or may not have noticed at the grocery story is to get out of the rut that mealtimes can bring over time. There’s an tan-colored, oval, root vegetable you maybe have seen at the store and not known what it is or how to pronounce its name. It’s called jicama (pronounced “hee-kah-mah”). Some may call it a yam bean or a Mexican water chestnut. It is part of the legume (bean) family. This is a tuber like a potato, but it is less starchy. However, the tough skin on a jicama needs to be peeled with a knife (not a vegetable peeler – the skin is too tough) because it contains a toxin (that is NOT found in the fleshy part of the tuber).

A jicama is sweet like a pear or apple, but it is starchier. When eaten raw, it is quite crunchy, making it ideal for nut butters, hummus and other dips. ​

How do you chose a jicama?

Choose smaller jicamas because they are less fibrous. Choose ones with smooth skins because shriveled skin is a sign of an older tuber. They do not need to be refrigerated until they are cut open. If you find a jicama that is too large, ask the produce worker to cut into half or fourths. ​

You can eat a jicama either raw or cooked, as you would eat an apple, pear, or kohlrabi. Some ideas for using it are: